Ditch the Ibuprofen and Still Beat the Pain

Inflammation Bringing You Down? Consider CBD.

As athletes, experiencing pain from inflammation in both our muscles and internal organs is the inevitable price we pay for our sport. But when these conditions start to become chronic it’s time to take back our own quality of life.

The common “go-to” for helping alleviate the pain with most endurance athletes is often an over-the-counter (OTC) drug touting anti-inflammatory effects. Otherwise known as NSAIDs (non-steroidal anti-inflammatory drugs), over 17 million Americans take these drugs on a daily basis. And among endurance athletes who put their bodies through the ringer on a regular basis, the percentage of those regularly taking OTC drugs is extremely high. 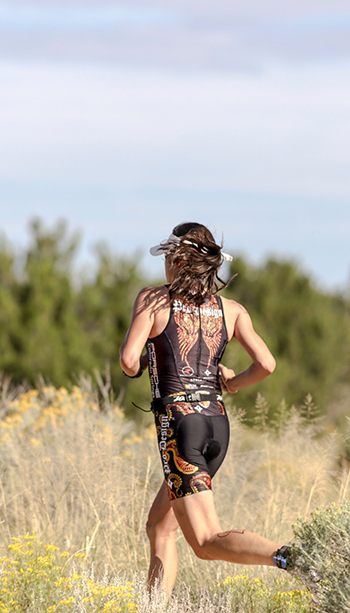 Most of the common NSAIDs we’ve all taken at some point include ibuprofen, aspirin and naproxen (i.e. Aleve). These drugs work by blocking the enzymes in our body known to produce prostaglandins that protect the lining of both your stomach and intestines, as well as activating blood platelets. By blocking prostaglandins, these drugs aim to combat inflammation that stems from injury that can result from a hard workout. The problem however is that these drugs aren’t selective in how they deter one’s enzyme production which means the temporary relief an athlete may experience comes with a host of adverse side effects.

With endurance athletes, regular use of NSAIDs can lead to even greater compounded problems. For example, acute kidney injury (AKI) is a common issue encountered in over 34% of ultramarathoners. NSAIDs are thought to contribute to AKI and yet between 35%-75% of ultramarathoners ingest them during competition. Research found that many of these competitors (about 44%) had creatinine levels high enough to indicate the onset of AKI after running 50 miles. But the incidence was particularly high among runners who had taken ibuprofen. They were found to be about 18% more likely to have developed acute kidney injury than racers who did not take any NSAIDs.

Complications that often result with prolonged use of NSAIDs include headaches, heartburn, ulcers, dizziness, leg swelling, liver and kidney malfunction, high blood pressure and the list goes on. It starts to read like one of those scary TV commercials we’ve all seen, doesn’t it? In fact, statistics show that over 100,000 people are hospitalized every year for gastrointestinal complications that come from continued use of NSAIDs. In 2005, a report from the U.S. Food and Drug Administration put out a warning about the increased cardiovascular risks that come from extended use of NSAIDs. You may even recall that as recent as 2016 the FDA updated their labeling requirements on NSAID products to include warnings of increased risk for heart attack and stroke.

Adding to the long list of common NSAID side effects, of which CBD has none, include gas, bloating, stomach pain, nausea, vomiting and diarrhea.

As athletes and those of us who treat our bodies with the utmost care, we find that relying on these hazardous drugs to maintain our health simply out of the question. Using a dangerous, synthetic pill instead of an all-natural, non-toxic, plant-based solution just doesn’t seem logical.

Twenty years of research and countless studies have proven the anti-inflammatory benefits of phytocannabinoids and terpenoids, both of which are included in today’s full-spectrum CBD supplements. Better yet, these plant-based cannabinoids utilize different mechanisms in an athlete’s body to produce the desired anti-inflammatory results we need to keep up with our training and recovery, without the negative side effects that come from using NSAIDs. The non-psychoactive compound CBD has shown significant COX-2 enzyme blockage, which is the key to naturally reducing inflammation in one’s body. A 2005 study conducted by Doctors Geoffrey Guy and Ethan Russo reports that phytocannabinoids produce a naturally balanced and nontoxic medicinal effect as compared to the alternative of harmful OTC drugs designed to achieve the same anti-inflammatory results.

The ready availability of CBD as alternative natural medicine in the United States has drastically changed the landscape of options for athletes protecting their health. Reputable suppliers are now offering CBD products that combine medical grade full-spectrum hemp oil with other safe additives such as turmeric-curcumin to increase the anti-inflammatory effects. Best news of all for competitive endurance athletes is that many options THC-free options exists making these supplements approved by the World Anti-Doping Agency (WADA). In general, the growing acceptance of CBD as an alternative to NSAIDs has given athletes a risk-free way to reduce their pain without the risky side effects that come as a result of using Ibuprofen and the like.

Plant a tree for free

If you love the outdoors as much as we do, this is a no-brainer.
Sign up for updates from Venga CBD and we'll plant a tree in your honor plus you'll be the first to know about the latest products, promos and info.